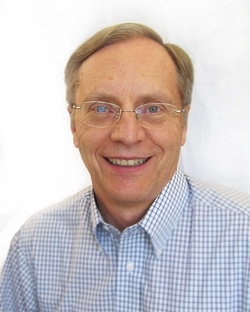 I do theoretical chemistry research.  Currently, I am investigating the statistical mechanics of small systems to resolve inconsistencies relating to applying principles of thermodynamics to nanoscale systems.  In particular, two competing definitions of entropy agree for large systems, but they disagree when applied to systems of a few dozen atoms. Previously, I have also worked on vibrational and rotational dynamics, infrared multiple photon absorption, and molecular recognition.

This is the golden age of theoretical chemistry. Advances in computer hardware and software sometimes allow calculation of experimental results faster and cheaper than actually doing the experiments (and without hazardous waste to dispose of). We use a range of computers from large supercomputer clusters to personal computers to predict or explain the results of complex experiments.

My research has evolved over the years. Previous interests include:

My current research is in the statistical mechanics of nanoscale systems. As experimenters work on smaller systems, finite-size effects (differences from bulk behavior) become increasing important. One important size effect is that the Boltzmann distribution for one-particle energies is no longer accurate. Some of our recent results include:

All of these finite-system distributions limit to the standard ones for bulk systems, but corrections are required when doing theoretical simulations of finite systems or when interpreting nanoscale experiments.

The plot below shows the logarithm of probability versus energy in the simulation of 20 two-dimensional hard spheres in a reflecting box. The average energy is 25 (in arbitrary units). The black line is the Boltzmann distribution. The red diamonds are the numerical results from the simulation. The blue line is our theoretical distribution. It agrees with the simulation results within statistical errors. Note that the actual probability of having a large energy is considerably less than the value predicted by the Boltzmann distribution. This might be of considerable importance, for example, in predicting the rate of a unimolecular reaction that depends on the probability of the reactive degree of freedom having an energy above the activation energy. The actual reaction rate may be orders of magnitude less than that predicted using a Boltzmann distribution. 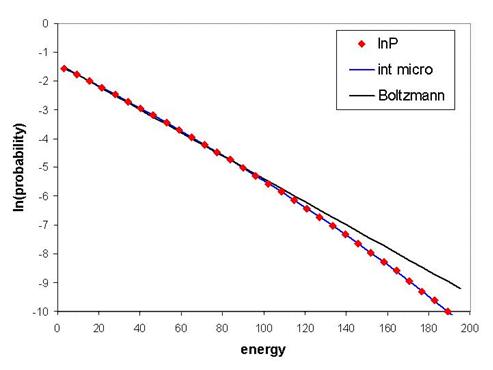 The following plot shows the breakdown of the equipartition principle in a simulation of ten hard-spheres with mass 1 and ten with mass 4 using periodic boundary conditions. The theoretically predicted equilibrium energy distributions and their averages are correctly predicted (1.0316 and 0.9684) within statistical errors (±0.0004), but the averages, and thus the temperatures are different by over 6%. 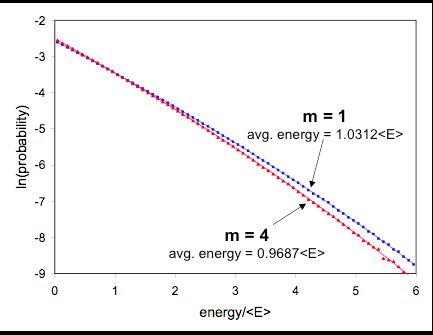