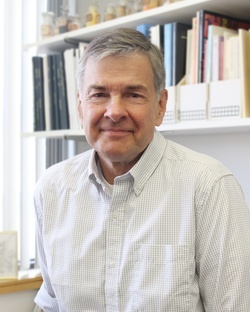 Over the past few years, the Graves Lab (in conjunction with collaborators at the University of Utah Medical School) have explored quantitative differences in serum proteins, peptides, and lipids in pregnant women who went on to experience a preterm birth in their pregnancy compared with pregnant women who had uncomplicated pregnancies. The approach employs a capillary liquid chromatography separation step coupled directly through an electrospray source onto a tandem mass spectrometer. Graves Lab research has focused on low abundance, low molecular weight species and our approach allows us to interrogate ~8,000 different molecules. As part of those studies, Graves researchers found several biomolecules with significant quantitative differences in women who had a preterm birth several weeks before women had their preterm delivery. (See the video linked below.) These biomarkers were validated in a second clinical study. Combinations of these markers provided the ability to identify nearly 90% of those women who would have a preterm birth allowing for early medical interventions to prolong the pregnancy.

More recently the Graves Lab Group has sought and has data to suggest that it has identified diagnostic serum biomarkers for Alzheimer’s disease. AD is currently diagnosed by subjective memory tests. Graves Lab research on this subject continues, but both serum peptidomic studies and serum lipidomic studies have provided many candidate biomarkers, combinations of which appear able to diagnose up to 90% of Alzheimer’s disease with acceptable false positive rates. This is true even with very early stage AD. Studies to identify the relevant diagnostic biomarkers continue.

The Graves Lab has developed and is employing tissue approaches (as opposed to serum, peptidomic and lipidomic approaches) to study changes in placenta. The placenta is considered a requirement for and possible participant in preeclampsia. The causes of PE are incompletely understood, but there are some abnormalities that appear to precede clinically established disease. The Graves Lab is exposing normal human placental explants to each of several of these conditions to see the elicit changes and to determine if there is a unique pattern in the changes that are specific to exposure to one of these PE conditions. A signature of changes specific to one abnormality can then be used to determine which of these changes are actually present in preeclamptic placentas and might participate in PE.

Click here to listen to Dr. Graves and PhD candidate Komal Kedia discuss their work with preeclampsia, a little-known disease that takes the life of 75,000 mothers and over half a million babies around the world each year, on BYU Radio (minutes 84 to 112).

Recently Graves researchers have looked at the effect of sodium pump inhibition on the repertoire of compounds found in human placental homogenates. Endogenous sodium pump inhibitors have been implicated in preeclampsia. A question asked has been whether changes caused by sodium pump inhibition of normal human placenta result in features observed in preeclamptic placentas. The Graves Lab has developed and used a global tissue peptidomic approach that looks at lower molecular weight and low abundance biomolecules. This approach allowed Graves scientists to survey ~7,000 unique species representing small protein, peptides, and some lipids. The second approach is a global lipidomic approach which focuses on lipids, i.e. hydrophobic molecules. This approach likewise employs mass spectrometry to catalogue differences between control and sodium pump inhibited placentae. Molecules whose expression is altered by sodium pump inhibition will be submitted to further tandem mass spectrometry to determine their chemical identity.