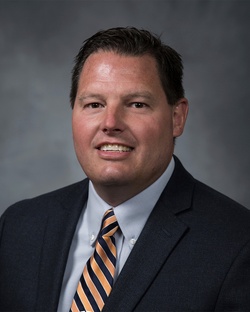 The Hansen Lab utilizes both computational and experimental tools to investigate a variety of environmental and atmospheric chemistry issues.

The Hansen Lab couples together high level ab initio computational studies with experimental studies designed to investigate the kinetics and spectroscopy of important atmospheric species and reactions. Hansen Lab studies are complemented by in situ air sampling campaigns designed to investigate source apportionment and general air quality issues. Hansen researchers utilize a human subject exposure chamber/environmental chamber to aid in the interpretation of air sampling campaign studies. Hansen researchers also have an active research element in their group that studies the conversion of biomass into energy.

Kinetics and Spectroscopy of Earth’s Atmosphere

The research objective of this element in Hansen Lab efforts is to improve the understanding of atmospheric chemical processes through focused laboratory and computational studies. Hansen Lab current research involves the study of organic peroxy radicals (RO2) and the influence of water vapor on their reactivity. Hansen researchers employ both computational and experimental tools to address this issue.

Organic peroxy radicals (RO2) play an important role in the atmospheric oxidation and in the combustion of hydrocarbons and are important precursors in the formation of smog. They are formed as a result of the addition of molecular oxygen to alkyl radicals. In polluted environments, the most important loss mechanism for RO2 radicals is by reaction with NO.

The dominate product pathway oxidizes NO to NO2 and consequently produces an alkoxy radical (RO). For larger alkyperoxy radicals a substantial fraction of the product yield is stable alkyl nitrate species (RONO2). The mechanism for production of an alkyl nitrate has been postulated by Darnall et al. to proceed through a vibrationally excited ROONO* intermediate.

As a consequence of the formation of a vibrationally excited intermediate during the reaction mechanism, one would expect that the production of an alkyl nitrate would depend on the size of the peroxy radical and demonstrate both a pressure and negative temperature dependence. For larger radicals (i.e. carbon chains > 4), the formation of a stable alkyl nitrate can represent 35% of the product yield. It has been postulated that the formation of various alkyl nitrates from Reaction 4 at 1 atm may be a significant source of missing NOy species [NOy = NOx + sum of all other NOx (NO and NO2) containing species]. This is important because organic nitrates are relatively inert and can provide a mechanism for long-range transport of pollution from one region to another. Close to source regions, the formation of organic nitrates, which serve as nitrogen oxide reservoirs, determines the extent to which nitrogen oxide emissions contribute to local ozone production and secondary organic aerosol formation.

The dominant path is the formation of NO2. A second association/isomerization branch forms nitric acid (6b). A third minor channel has been shown to produce HOONO. The pressure dependence on the branching ratio (k6a/k6b) has been reported by a number of investigators. Included in these investigations have been studies aimed at understanding the water vapor dependence on the kinetics and branching ratio of Reaction 6. Butkovskaya et al., probing the effects of temperature and water vapor on Reaction 6, have shown that the yield of HNO3 increases by 90% in the presence of modest amounts of water vapor (~ 3 Torr). The increased HNO3 production as a function of increasing water vapor was explained as occurring because of the formation of a HO2-H2O complex during the reaction mechanism.

The water in the complex serves as an efficient energy dump which favors the formation of the association product, nitric acid. Increased production of nitric acid was shown by Butkovskaya et al. to have important ramifications for atmospheric chemistry models as well as for measurement techniques commonly used to measure HO2 radical in the atmosphere.

The Hansen Lab Group has proposed the idea that other RO2 radicals in the presence of water may form similar complexes. In a recent high level ab initio study, Clark et al. reported on the optimized geometries, binding energies, and equilibrium constants for a series of organic peroxy radical-water complexes. Hansen Lab work showed that for species with strong binding energies (~ 5-7 kcal mol-1) a significant fraction (10-25 %) of the RO2 radicals can exist as a RO2-H2O complex in the atmosphere. It was shown that the binding energy of the complexes is largest when the R-group in the peroxy radical includes a carbonyl (C=O) or alcohol (-OH) moiety. 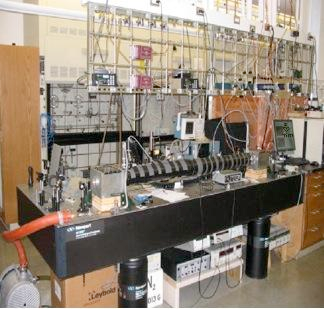 A high-powered laser fires a pulse of 351 nm light through a 2 meter long Pyrex reaction cell and is used to initiate the formation of the peroxy radical of interest. UV light from a D2 lamp is directed through the cell and is used to measure the concentration of both the reactants and products as a function of time using either a PMT or intensified and gated CCD as the detector. Simultaneously, light from a tunable diode laser operating in the NIR is directed into the reaction cell and is used to measure the concentration of HO2 or H2O. A laser induced fluorescence detection system is currently being tested that ultimately will be integrated into a kinetics apparatus (Figure 2) and will measure the concentration of NO2 in the reaction cell. This detection system will be used to measure the water vapor dependence on the product branching ratio for RO2 + NO reactions to form either RO + NO2 or RONO2.

This instrument allows researchers to simultaneously measure the concentration of reactants and products in short time intervals over a range of reaction times. This information is used in conjunction with kinetic models to measure reaction rate coefficients. This information is then incorporated into photochemistry models to predict the influence of a reaction on the composition of the atmosphere.

The most frequent cause of death among adults in the United States is disease of the heart (principally heart attacks), followed by cancer, and cerebrovascular diseases (stroke). Two of the three main causes are related to the function of the cardiovascular system. Long term exposure to elevated levels of particulate matter (PM) pollution have been implicated in the increased risk of the onset of ischemic heart disease and sub-clinical chronic inflammatory lung injury and atherosclerosis. A proposed mechanism for the effects of PM exposure on the cardiovascular system is via an inflammatory response of the endothelium. The exposure of heritable hyperlipidemic rabbits and mice to elevated, environmentally relevant PM concentrations has been shown to accelerate the progression of atherosclerotic plaques and vascular inflammation. Short term exposure to elevated and acute levels of PM was found to cause an increase in fibrogen and inflammatory markers in pulmonary and respiratory system of humans.

The connection of short term PM exposure and the onset of myocardial infarction has been observed in general population studies. Additionally, a cross-over study of 12,865 patients living in Utah showed that short-term exposure to high PM levels contributed to acute coronary disease, especially among the individuals predisposed or with current coronary condition. Acute vasoconstriction was observed in healthy adults after short term exposure to levels of fine particulate pollution and ozone common in urban areas. Although the effects of exposure to ambient pollution in humans have been studied, and the effects of exposure of experimental animals to concentrated ambient particulate material, CAPS, has been reported in several studies, a study of the endothelial function effects of direct, short-term exposure of humans to PM in laboratory conditions have not yet been performed.

Several designs for controlled human exposure have been developed. These include full-body exposure chambers, hoods and masks. Particulate matter generation in these systems employs either on-board production of pollution via previously obtained powder samples (wheat flour, dust, etc.) or the use of the particulate pollution directly extracted and concentrated from ambient atmospheric conditions. The Hansen Lab Group has designed and characterizes the performance of a two-stage PM exposure chamber/environmental chamber for human subjects developed to study the effects of short-term PM exposure as well as serve as an environmental chamber. The design of this chamber allows for the measurement of: 1) the concentrations of non-volatile and semi-volatile PM using semi-continuous monitors, 2) time-dependant size distribution, and 3) the concentrations of environmentally relevant gases, including CO, CO2, NOx, and O3. Additionally, the current design allows for the pretreatment (photochemically aging) of PM or atmospheric gases mixtures. The system allows scientists to investigate the influence of various conditions on ozone and PM production.

The Hansen Lab also uses a human exposure/environmental chamber to test and validate new semi-continuous instruments designed to measure PM and its components. These instruments are ultimately placed into the field where they are used in air sampling campaigns designed to investigate source apportionment. The Hansen Lab Group operates a sampling site in Lindon, Utah (Figure 6) as well as a trailer outfitted with a suite of air sampling instruments. The Hansen Lab collaborates closely with the Utah Department of Air Quality and Southern California Edison to conduct air quality sampling campaigns.

Lignocellulose is the structural material that makes up much of the structural matter of   plants. Approximately 33% of all plant matter is cellulose. Cellulose hemicellulose and lignin are the principle components of lignocellulose. Cellulose forms linear polymer chains in which individual monomer units are connected to one another through beta 1‐4 glycosidic bonds (β(1→4). (See Figure 7)

The inherit stability of β(1→4) glycosidic bonds makes it difficult for most organisms to break down cellulose. The Hansen Lab investigates pretreatment methods that disrupt the long‐chain polymer linkages of cellulose and of lignin-cellulose. The result is the formation of monomer glucose and smaller chained cellulose polymer chains that are susceptible to further breakdown by anaerobic bacteria. This pretreated substrate is then introduced into an anaerobic induced blanket reactor (IBR) to digest the cellulose and consequently convert it into methane gas.   The gas that is produced from the digestion of cellulose and lignocellulose is typically composed of 75 % CH4, 25% CO2, 1000-2000 ppm H2S and saturated in water vapor. The second research objective of the Hansen Lab in regards tp biofuel/alternative energy is to purify the biogas stream liberated by the anaerobic digestion process. The Hansen Lab Group has, to date, filed 3 patents (patent pending) technologies. This technology has been licensed from Brigham Young University to a start-up company called Anaerobic Digestion Technology (AD Tech). Hansen Lab technology has been successfully used to pretreat and digest algae, green waste (leaves and grass clippings), and sawdust.

4.  Good, David A.; Hansen, Jaron; Kamboures, Mike; Santiono, Randy; Francisco,  Joseph S., “An Experimental and Computational Study of the Kinetics and Mechanism of the Reaction of Methyl Formate with Cl Atoms,”  Journal of Physical Chemistry, A, 2000, 104,1505-1511.

12.  Hansen, Jaron C. and Francisco, Joseph S., “Radical-molecule complexes: changing our perspective on the molecular mechanisms of radical-molecule reactions and their impact on atmospheric chemistry,” ChemPhysChem, 2002, 3, 833-840.