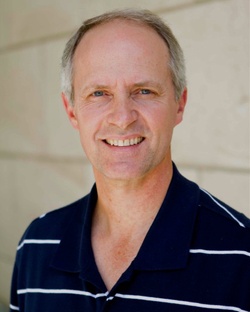 Peterson Lab studies focus on the chemical synthesis and biological evaluation of potential antitumor and/or antiviral compounds. Modification of naturally occurring nucleosides is a unifying feature in Peterson Lab research. 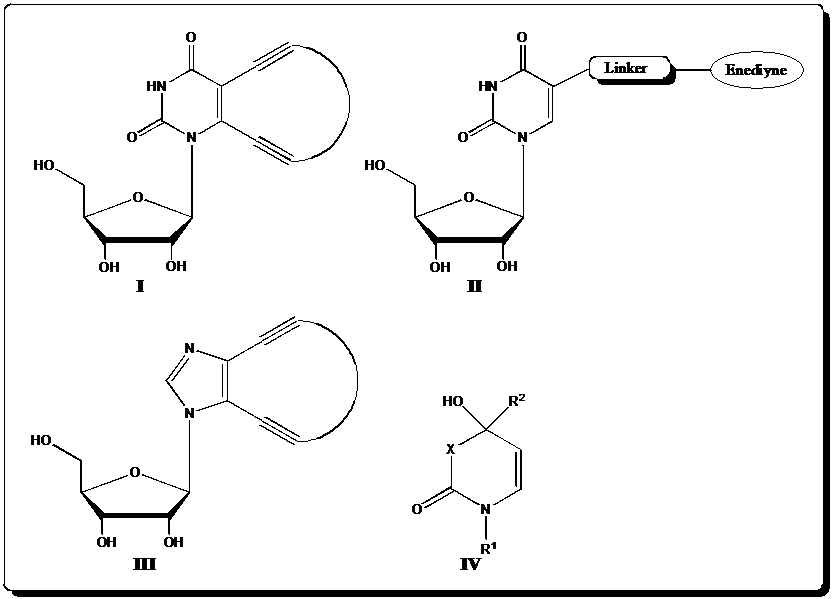 Naturally occurring enediynes are among the most potent antitumor compounds currently known. Unfortunately, selectivity levels are low, and general cytotoxicities are a major problem. This significantly limits their use as clinically useful anticancer drugs, and at the present time no naturally occurring enediyne has been approved for use in chemotherapy. Peterson scientists are intrigued by the possibility that nucleoside-fused or nucleoside-linked enediynes might selectively target rapidly dividing tumors due to the tumor's enhanced need for building blocks for DNA or RNA. The enhanced uptake of nucleosides by rapidly dividing tumors could potentially lead to a more selective targeting of tumor cells and thereby reduce problems associated with general cytotoxicity. Peterson scientists have successfully synthesized numerous analogues of compounds I""III, and a majority of the compounds tested demonstrate promising activities (IC50 values in the low Î¼M range) against murine models of leukemia, mammary carcinoma, and several lines of human T-lymphocytes. Analogues of compound III have been shown to cleave supercoiled DNA (see slide show).

Cytidine triphosphate synthetase (CTP synthetase; EC 6.3.4.2) and cytidine deaminase (CDA; EC 3.5.4.5) are two key enzymes involved in de novo synthesis and salvage pathways in pyrimidine biosynthesis. CTP synthetase catalyzes the conversion of uridine triphosphate (UTP) to CTP. This is the key step in the only de novo pathway for the biosynthesis of cytidine. CTP may be incorporated into RNA or undergo dephosphorylation to give cytidine diphosphate (CDP), a substrate for ribonucleotide reductase. The product of reduction (dCDP) is converted to dCTP which is incorporated into DNA. Salvage pathways for uridine include hydrolysis of cytidine and cytidine monophosphate. These hydrolyses are catalyzed by CDA and CMP deaminase respectively. The activity of CTP synthetase has been shown to correlate with cellular proliferation in malignant tissues and may be linked to the process of malignant transformation. High levels of CTP synthetase activity have been reported in several malignant tissues including rat hematoma, human renal cell carcinoma, Hodgkin's disease, non-Hodgkin lymphomas, and acute lymphoblastic leukemia. Efficient CTP synthetase inhibitors could act as potent antineoplastic agents in these and other forms of cancer. CDA has been implicated in the development of resistance to commonly used cytosine-based antitumor agents such as arabinosyl cytosine (araC), 5-azacytidine (AZA), and gemcitibine. Inhibitors of CDA could potentiate the activities of these currently used antitumor agents by prolonging their lifetimes in vivo. Compounds IV mimic the transition states involved in the CTP synthetase-and CDA-catalyzed reactions and could act as competitive inhibitors of these important enzymes.

HIV integrase (IN) is one of three enzymes encoded for by HIV. IN is a 32 kDa protein consisting of three distinct domains (N-terminus, catalytic core, and C-terminus), and plays a key role in incorporating viral DNA into host DNA. This is accomplished via a three-step process referred to collectively as integration. The first step in integration involves cleavage of a GT dinucleotide from both 3'-ends of double stranded viral DNA and is called 3'-end processing. The 3'-end processed duplex next undergoes a concerted transesterification reaction with a phosphodiester linkage in host DNA, a process referred to as strand transfer. In the final step, the unmatched AC dinucleotides on both 5'-ends and associated gaps are repaired by a cellular enzyme. The first two steps, 3'-end processing and strand transfer, are catalyzed by IN. IN is a magnesium metalloenzyme, and an active site Mg2+ is involved in both 3'-end processing and strand transfer. Although IN was identified as a promising antiviral target over a decade ago, only recently has a viable candidate for clinical inhibition of IN been discovered (the Shionogi/GlaxoSmithKline compound S-1360 is currently undergoing phase II clinical trials). The relentless emergence of drug-resistant HIV strains demands continual addition of antiviral compounds to our arsenal of chemotherapeutic agents. Peterson researchers have recently embarked on a drug discovery program aimed at discovering inhibitors of HIV integrase. Peterson researchers also utilize state-of-the-art molecular modeling software (FlexX and CombiFlexX, Sybyl 6.9, Tripos, Inc.) to perform high-throughput screening of vast (> 50,000) compound libraries in order to identify promising leads for laboratory synthesis. Vast combinatorial libraries are docked at strategic points indicated by the X-ray crystal strucure of IN. Compounds identified by the docking studies share in common a nucleoside(tide) scaffold and should bind tightly to critical residues at or near the active site of IN. The Peterson Lab Group utilizes its expertise in nucleoside chemistry to synthesize the most promising compounds indicated by the in silico high-throughput screen. The IN inhibitory activities of lead compounds will be determined in collaboration with expert enzymologists.

Projects are currently open in each of the areas listed above. Peterson students gain valuable hands-on experience in all aspects of modern synthetic organic chemistry. This includes: (1) working with air and moisture sensitive compounds/reagents under inert atmosphere conditions, (2) designing and executing multi-step syntheses, (3) purifying reaction products to analytical purity (Flash, radial, and preparative chromatography; HPLC, recrystallization, distillation, etc.), (4) obtaining and interpreting 1H and 13C NMR and UV spectra, and (5) writing and preparing manuscripts for publication and/or presentation at scientific meetings. For students desiring experience that will prepare them for a career as a medicinal chemist in the pharmaceutical industry, research projects in this group provide excellent training.