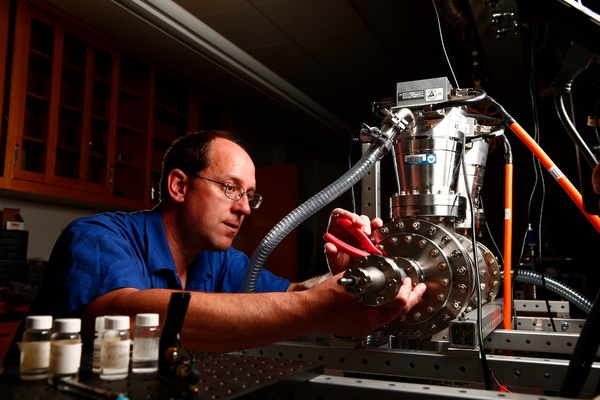 The International Mass Spectrometry Society recently presented Dr. Daniel Austin with the Curt Brunnee
Award, recognizing outstanding contributions to the development of instrumentation for mass spectrometry by
a scientist under age 45. Dr. Austin was invited to Florence, Italy to receive the award and present a lecture at
the 22nd  International Mass Spectrometry Conference taking place 26-31 August 2018. This is only the third
time the prestigious award has been given to a scientist in North America.

Dr. Austin’s research group has pioneered efforts to miniaturize ion traps for portable chemical analyzers, and
they have also developed devices for studying nanoparticles and microparticles by measuring their electrical
charge and mass. A novel approach used by the group is to create electric fields using printed circuit boards or
lithographically patterned substrates, rather than relying on conventional, machined metal electrode structures.
They have also designed various instruments and techniques for making mass spectrometric measurements
from spacecraft. For instance, they are developing an inlet that reduces the fragmentation of molecules
brought into a mass spectrometer from an orbiting spacecraft, and they hope to have this device included on
future missions within the Solar System. This device will allow confident identification of molecules that
might indicate habitable environments or possible life elsewhere in the Solar System.

For many years Dr. Austin’s research group has developed technology to take mass spectrometry out of the lab
and into the field. Portable and hand-held chemical analyzers have a significant advantage for many
applications including emergency response, environmental monitoring, chemical weapons detection, and
national security. His group has developed the world’s smallest linear ion trap, the central element of a
portable system. PerkinElmer is now commercializing this technology for their next generation of portable gas
chromatograph mass spectrometers.

Dr. Austin’s research group developed an image charge detector comprised of patterned electrodes, and are
currently working with NASA to develop this into an instrument to measure the charge and size of
atmospheric dust on Mars. These dust grains are a potential respiratory hazard to astronauts, and may interfere
with oxygen production and solar panels. This analyzer will allow the first measurements of the properties of
these grains and hopefully lead to solutions as NASA prepares to send a crewed mission to Mars.
Dr. Austin and his students have also contributed to research instrumentation within the Department. For
instance, he and an undergraduate student designed and built a TGA-MS (Thermogravimetric Analyzer – Mass
Spectrometer) using a commercial TGA, a commercial quadrupole mass filter, an off-the-shelf vacuum system,
and easily obtained components.  They also developed the sample line and interface between the two
instruments and wrote software to control both from a single platform.  This effort provided a low-cost
alternative to commercial TGA-MS instruments while matching the performance of a dedicated system, with
publicly available software and diagrams.  The instrument is currently used by several research groups.

The Department of Chemistry and Biochemistry would like to congratulate Dr. Austin on this well-deserved
achievement.