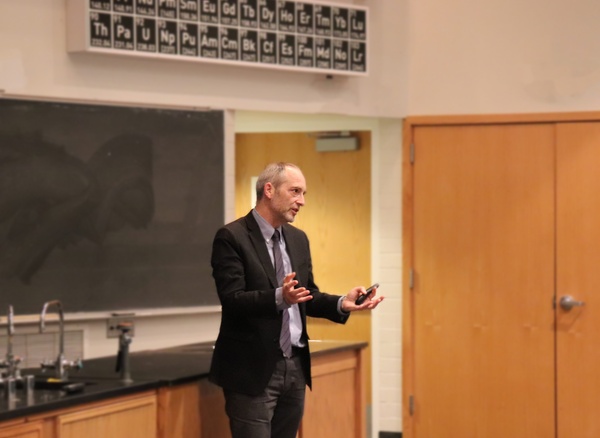 This year marks the 32nd annual Broadbent Lecture Series, created in honor of H. Smith Broadbent to celebrate his forty years as a professor at BYU and his advances within the field of organic chemistry.

This year the department welcomed Professor John F. Hartwig from the University of California, Berkeley as the Broadbent guest lecturer. Dr. Hartwig’s work involving catalysis has earned him over 20 awards and recognitions, and he has served as the Henry Rapoport Professor of Chemistry since 2011.

Dr. Hartwig’s lectures, given January 13-14, followed his research on catalysis, how catalysts can be used to create faster reactions, and to create new molecules that can aid in solving problems from producing more food with limited land to solving medical crises.

In his public lecture entitled “Changing Chemical Synthesis with Catalysis,” Dr. Hartwig gave students a brief overview of how chemical synthesis can positively affect daily life, as well as several examples of the research his lab has done involving catalysis.

He showed students how chemical synthesis has been used to create a simple household ingredient: acetic acid (vinegar). Naturally, this substance is formed from bacteria in sugar, but with the roughly five billion pounds of acetic acid needed per year, sugar is the least efficient way to make it. Chemists have had to find other ways to produce it, most commonly through chemical reactions involving coal. Through an extensive process in which catalysts play an integral role chemists have been able to use synthesis in order to fill a need which nature cannot keep up with.

Hartwig then took this simple idea and expanded upon it through a discussion of his lab’s research. He introduced several drugs that would not exist without synthetic chemistry, such as Lipitor or Indinavir. Hartwig then explained how the use of catalysts could greatly increase the production of such products within the field of medical chemistry. Through research done by his lab, Hartwig and his team have developed catalysts which perform cross-coupling to make carbon nitrogen bonds which has allowed for the discovery of a new antidepressant and a cure for Hepatitis C. With the goal to use the same efficiency that catalysts have within the body, his lab continues to perform research to discover catalytic reactions that enable us to make these unnatural molecules which will improve and expand on chemical synthesis.

Dr. Hartwig’s technical lecture followed specific projects his lab team has been working on within this vein of cross-coupling and catalysis. Their work has focused on the integration of functional groups into usually unreactive complex molecules, which has been a long standing issue within synthetic chemistry. Through their research, they have found success with introducing a single temporary functional group into a complex molecule, which allows a diversity of products to form from a single C-H bond functionalization reaction. Using these methods, they demonstrated that these reactions could occur at one primary C-H bond in a natural product, showing the potential that this type of reaction chemistry could occur at unreactive positions of complex molecules, such as natural products. Hartwig and his lab continue to seek for new systems for the functionalization of C-H and O-H bonds in complex molecules, hoping to develop new types of catalysts with the ability to achieve selective catalysis with transition metal centers.