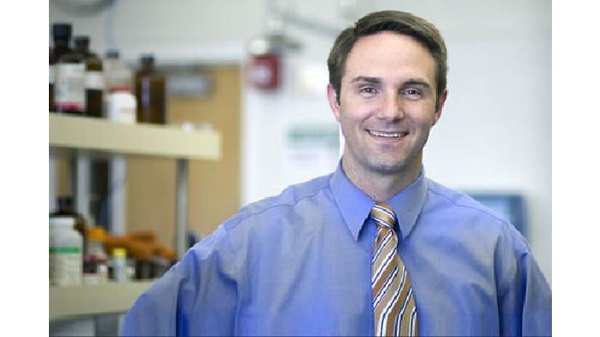 The College of Physical and Mathematical Sciences welcomes David Michaelis as a new assistant professor in the Department of Chemistry and Biochemistry.

Michaelis completed his undergraduate work in chemistry at BYU in 2005. He earned his PhD in 2009 in organic chemistry from the University of Wisconsin–Madison, where he worked on the development of new oxidation reactions. He then took his family to California to perform postdoctoral studies at Stanford University as a National Institutes of Health (NIH) postdoctoral fellow. There he studied the design and synthesis of a promising anticancer agent.

During his second year at Stanford, Michaelis applied for and was offered a position as an assistant professor at BYU, but decided to remain at Stanford to finish out his fellowship, a decision that served him well.

“This 2013 allowed me not only to finish work at Stanford but also to set up my lab at BYU remotely, recruit students, and write grant proposals for my proposed research,” he said.

During the years to come, he and his lab hope to develop new catalysts to enable more efficient reactions.

“We plan to develop new catalysts for converting oil-based materials into drug-like molecules,” he said.

“We also hope to develop catalysts that mimic the way nature synthesizes drug-like molecules, which could greatly impact the cost of production for important antimicrobial drugs like those for malaria and tuberculosis.”

After his first chemistry class as a freshman, Michaelis decided he didn’t like chemistry. After his mission, however, he took organic chemistry and “fell in love.” He hopes to impart this love of learning about the natural world to his students, especially those who may be less excited about chemistry, as he was as a young student.

“I teach a really challenging subject matter which is often dreaded by the students that have to take it. . . . They generally come in scared or with a negative attitude towards the class,” he said.  “I hope to help my students get over the negative stigmas about organic chemistry and help them see it is really cool and fun to learn chemistry, and help them translate this vision into lifelong learning.”

Michaelis met his wife as an undergraduate at BYU, and they welcomed their first daughter just before moving to Wisconsin for Michaelis’ doctoral work. They now have three daughters and a son.

When he is not busy at the lab or with church service, Michaelis enjoys reading and spending time with his wife and children.

“We really enjoy swimming and playing in the water together, especially with water-weenies that you can make from materials purchased from the chemistry stockroom!”

By Meg Monk, College of Physical and Mathematical Sciences