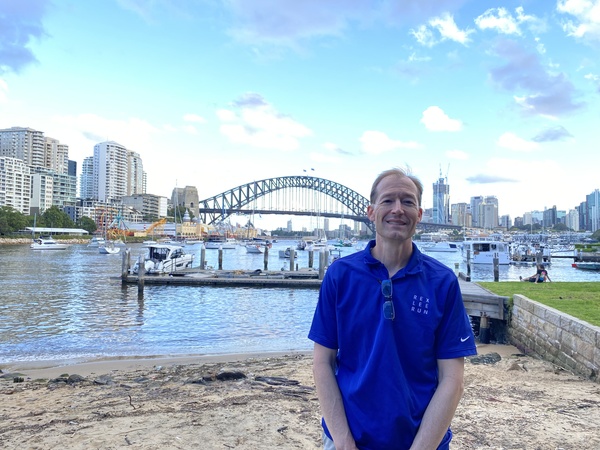 Steven Castle is the director of the Simmons Center for Cancer Research, which is currently conducting research to find more effective methods to prevent, treat, diagnose and cure cancer. At the beginning of 2022 Dr. Castle started his sabbatical, where he has had the opportunity to continue this research in several countries throughout the world.

Castle and his wife began their journey in Singapore, then made their way to Australia - visiting Melbourne, Brisbane and Sydney. He explained that “Singapore and Australia both endured lengthy border closures during the pandemic, and as a result each of the six universities I have visited so far has not had international visitors in approximately two years. As a result, they have been very gracious hosts and enthusiastically welcomed me.” After interacting with these professors, Castle noted one of the most impactful experiences on his sabbatical thus far was realizing the importance of face-to-face interactions to scientists.

Dr. Castle in Singapore during his travels.

Much of Castle’s research involves the synthesis of peptides and exploring ways to make them more suitable as drugs by hindering their degradation in the body. “Australian chemists have traditionally been on the cutting edge of peptide science - due, in part, to the number of animals here that produce venomous peptides. Their initial focus on these naturally occurring peptide venoms has expanded into peptide synthesis,” explained Castle. This will allow him to improve his ability to synthesize bioactive peptides.

He also had the opportunity to meet with professors in Singapore who are experts in using catalysis to develop new and improved methods of synthesizing organic compounds. One of his other research areas is organic synthesis, which helps these organic compounds be used as potential anti-cancer agents. “These compounds could be natural products produced by various types of organisms (everything from bacteria to marine sponges) that are too scarce to be harvested in sufficient quantities, or they could be synthetic analogs of natural anticancer agents,” said Castle. The compounds are synthesized in their lab, then scanned for anticancer activity by collaborators.

There are many research projects in progress at the Simmons Center for Cancer Research that cover a range of cancer areas. With the gained knowledge obtained while on sabbatical, Castle hopes to apply it to the diverse research areas that they are currently working on.