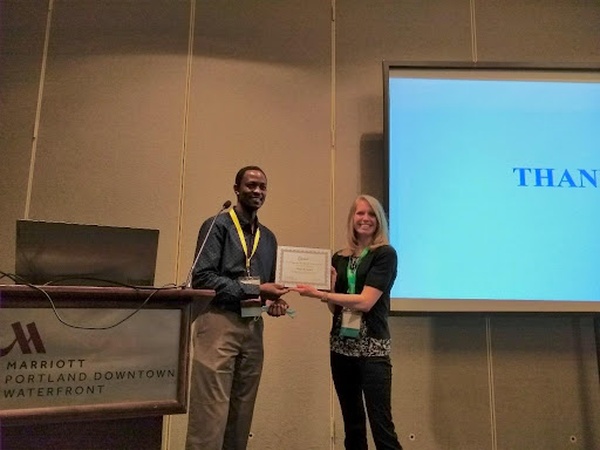 Peter Mpaata recently won the Etter Student Lecturer Award from the Small Molecule Scientific Interest Group (SIG) at the American Crystallographic Association (ACA) Annual Meeting in Portland, OR. Peter spoke about his work developing three novel synthetic routes to bioactive lignans and furopyranones. In the first route, crystal structures of key intermediates confirmed the retention of chirality throughout his syntheses of the lignans. In the second route, crystal structure analysis provided important insights into the mechanism of an unexpected but dominant reaction forming a furopyranone instead of the anticipated lignan. In the final synthetic route described, the crystal structure of the lignan product revealed that two separate products had formed and co-crystallized. The mixture of these aromatic and non-aromatic products helped explain ambiguous and seemingly contradictory information in the NMR data. Peter spoke in the “Cool Structures” session of the conference which was chaired by Dr. Stacey Smith, so Dr. Smith was fortunate to be able to present the award to Peter.

Peter along with the session speakers and chairs.