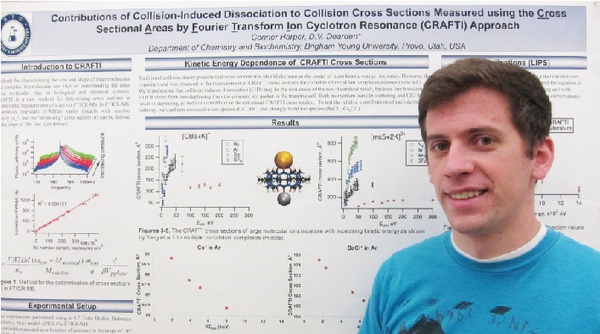 Of around 140 physical chemistry students in a poster session at the ACS (American Chemical Society) National Meeting in Denver last week, only a handful were chosen to receive awards for their research.  One of these few was BYU’s own Conner Harper, who graduated with his BS in chemistry this last December.

Harper was awarded the American Chemical Society Division of Physical Chemistry Outstanding Student Poster Award for his research in Dr. David Dearden’s group. The Dearden group found an anomaly while measuring ion cross-sections. While the principles of traditional collision theory led them to believe that increasing the kinetic energy of their analyte ions should decrease the measured cross section, they observed the opposite trend.  The group hypothesized that collisions with background neutral gas were causing the dissociation of the ions, an effect that would explain their non-traditional results.  Harper conducted the experiments to establish this hypothesis using non-dissociable ions as a control group.   His poster, entitled “Contributions of collision-induced dissociation to collision cross sections measured using the cross sectional areas by Fourier transform ion cyclotron resonance (CRAFTI) approach,” wowed the judges and he walked away from the conference with three hundred dollars.

More important to Harper, however, was the chance to attend his first national meeting.  “The conference was a great experience for me,” he said. “I enjoyed both the scholarly atmosphere and the science that was discussed.”  According to ACS.org, each national meeting attracts an estimated 11,000 to 13,000 chemists, including academic professionals, chemical engineers, and students like Harper.  The conferences exist for networking, sharing research, and learning about new technologies in the world of chemistry.

Harper is now researching a new topic: graduate schools.  With acceptance letters from Stanford, University of California—Berkeley, Caltech, MIT, and the University of Colorado—Boulder (all of which are in the top ten physical chemistry PhD programs in the United States), Harper has a lot of work to do.  As he has been traveling to each school, he has realized the value of his undergraduate education. “Few places offer the great undergraduate research opportunities that BYU does,” he said. “I am really grateful to my mentor, Dr. David Dearden, for taking me on as a research assistant in his lab.  I’ve learned a lot from my experience; not only scientific knowledge, but also practical aspects of research that I think have helped me prepare for graduate school.”